Today we start a new book in our online book club, Find The Treasure. Our focus is on uplifting books and this book is “Wild: From Lost to Found on the Pacific Crest Trail” by Cheryl Strayed

To join our discussion, please click on the page tab on the right: Find the Treasure – Online Book Forum, and then click on “Wild: From Lost to Found on the Pacific Crest Trail”

We hope you join us on this journey of discovery.

Amazon Best Books of the Month, March 2012: At age 26, following the death of her mother, divorce, and a run of reckless behavior, Cheryl Strayed found herself alone near the foot of the Pacific Crest Trail–inexperienced, over-equipped, and desperate to reclaim her life. Wild tracks Strayed’s personal journey on the PCT through California and Oregon, as she comes to terms with devastating loss and her unpredictable reactions to it. While readers looking for adventure or a naturalist’s perspective may be distracted by the emotional odyssey at the core of the story, Wild vividly describes the grueling life of the long-distance hiker, the ubiquitous perils of the PCT, and its peculiar community of wanderers. Others may find her unsympathetic–just one victim of her own questionable choices. But Strayed doesn’t want sympathy, and her confident prose stands on its own, deftly pulling both threads into a story that inhabits a unique riparian zone between wilderness tale and personal-redemption memoir. –Jon Foro 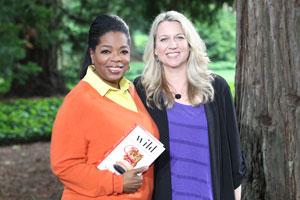 I wrote the last line of my first book, Torch, and then spent an hour crying while lying on a cool tile floor in a house on a hot Brazilian island. After I finished my second book,Wild, I walked alone for miles under a clear blue sky on an empty road in the Oregon Outback. I sat bundled in my coat on a cold patio at midnight staring up at the endless December stars after completing my third book, Tiny Beautiful Things. There are only a handful of other days in my life–my wedding, the births of my children–that I remember as vividly as those solitary days on which I finished my books. The settings and situations were different, but the feeling was the same: an overwhelming mix of joy and gratitude, humility and relief, pride and wonder. After much labor, I’d made this thing. A book. Though it wasn’t technically that yet.

The real book came later–after more work, but this time it involved various others, including agents, publishers, editors, designers, and publicists, all of whose jobs are necessary but sometimes indecipherable to me. They’re the ones who transformed the thousands of words I’d privately and carefully conjured into something that could be shared with other people. “I wrote this!” I exclaimed in amazement when I first held each actual, physical book in my hands. I wasn’t amazed that it existed; I was amazed by what its existence meant: that it no longer belonged to me.

Two months before Wild was published I stood on a Mexican beach at sunset with my family assisting dozens of baby turtles on their stumbling journey across the sand, then watching as they disappeared into the sea. The junction between writer and author is a bit like that. In one role total vigilance is necessary; in the other, there’s nothing to do but hope for the best. A book, like those newborn turtles, will ride whatever wave takes it.

It’s deeply rewarding to me when I learn that something I wrote moved or inspired or entertained someone; and it’s crushing to hear that my writing bored or annoyed or enraged another. But an author has to stand back from both the praise and the criticism once a book is out in the world. The story I chose to write in Wild for no other reason than I felt driven to belongs to those who read it, not me. And yet I’ll never forget what it once was, long before I could even imagine how gloriously it would someday be swept away from me.

Echoing the ever-popular search for wilderness salvation by Chris McCandless (Back to the Wild, 2011) and every other modern-day disciple of Thoreau, Strayed tells the story of her emotional devastation after the death of her mother and the weeks she spent hiking the 1,100-mile Pacific Crest Trail. As her family, marriage, and sanity go to pieces, Strayed drifts into spontaneous encounters with other men, to the consternation of her confused husband, and eventually hits rock bottom while shooting up heroin with a new boyfriend. Convinced that nothing else can save her, she latches onto the unlikely idea of a long solo hike. Woefully unprepared (she fails to read about the trail, buy boots that fit, or pack practically), she relies on the kindness and assistance of those she meets along the way, much as McCandless did. Clinging to the books she lugs along—Faulkner, Flannery O’Connor, Adrienne Rich—Strayed labors along the demanding trail, documenting her bruises, blisters, and greater troubles. Hiker wannabes will likely be inspired. Experienced backpackers will roll their eyes. But this chronicle, perfect for book clubs, is certain to spark lively conversation. –Colleen Mondor